Securing a future for the white race! 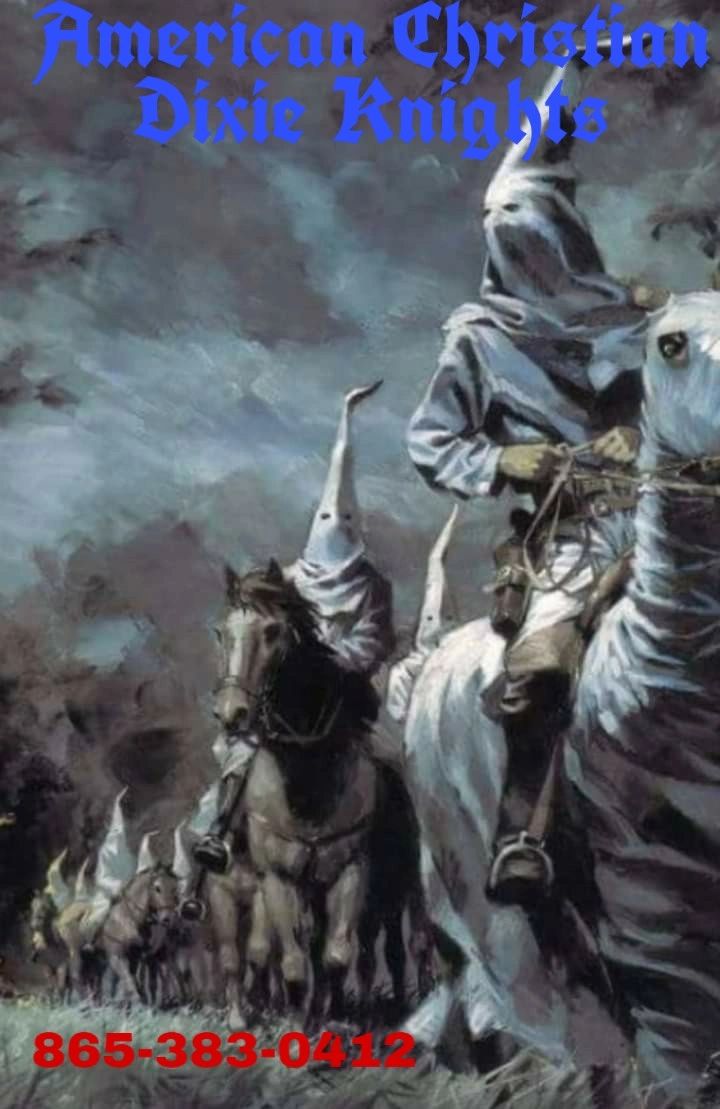 We are a very active and ever growing order of the Ku Klux Klan and we are based out of Tennessee, but started in Alabama . The ACDK was founded in 2014 made up of 3 groups that had been around for years. The Midwest Dixie Knights from Missouri, the American Christian Knights of Mississippi and the Aryan Knights of North Carolina . Two years later ACDK absorbed the White Knights of the Wasatch Front, making 1 large, extremely organized and far reaching organization. With this union the American Christian Dixie Knights has active klaverns (realms) in the West, Midwest, most of the Dixie states and as far north as Ohio . After careful consideration we realized there is no reason for all these groups, fighting for the same cause with the same goals, but functioning separately.

The American Christian Dixie Knights is a traditional order that follows the ways of old and the original Ku Klux Klan. We teach the old ways that are no longer practiced because most groups of today do not even know a lot of the lost kraft. There are many Klan groups out there right now that want to change things and make it their own. Some of these pop up fly by night internet Klans are naturalizing members over the phone and video calls. If you are one of these victims that have been "duped" into this, we want to show you the REAL Klan. If someone is not naturalized into the Invisible Empire in person, skin to skin, eye to eye, they are not a legal citizen nor recognized by the true Invisible Empire. These new internet "Klans" give the few true a very bad name and are usually not even legally chartered organizations. We stand behind our convictions and promote God, Race, Nation and Family. We love America the way it used to be and believe in protecting the Constitution the way it was originally written. We are proud white Christian Patriots that work tirelessly for white rights and the advancement of our beautiful race. We want to ensure a future for our white families while living through God.

America is in distress, And needs you! The American Christian Dixie Knights are United with many other TRUE Klans and is one of the founding groups of the UNITED FEDERATION OF KLANS , and belive in in the advancement of the white race working arm and arm with our brothers and sisters.

America needs help! Right now this country is turning anti-American right under your noses. Our children are no longer allowed to recite the pledge of allegiance or have prayer in school because it may offend someone. Merry Christmas has been replaced by happy holidays in almost all retail stores to be "sensitive" to anti Christian groups. Our military is no longer allowed to openly practice Christianity while in uniform. Meanwhile, America is making sanctuary cities for illegal immigrants and mosques for Muslims in our prison systems and places of work. This is unacceptable and the people need a voice.

It is not illegal to be white, yet. However if you are proud of your heritage and not ashamed of being white, you are a biggot!  The homosexuals can demonstrate and that's OK with society. If the blacks say they are black and proud and work as a network, they are considered brave and are backed by cowards such as the NAACP, ADL, SPLC and countless others to make sure they get  their way. The Mexicans have la razza and  the Jews own almost all media outlets which they use to try abolish the white race. (Which is their ultimate goal ; GLOBALISM )

It is now more socially acceptable to mix races and taint the blood line of the Caucasian than it is to preserve them.

Blacks make up a mere 17.5% of the American population and yet contribute to 87.2% of all violent crime. These are not made up numbers., these are solid statistics. Black on white violent crimes have skyrocketed, and these are not viewed as hate crimes.

These are just a few examples of the crumbling of America and the disintegration of the white race as we know it.

Good news though! The Ku Klux Klan is growing rapidly and fighting back. The Invisible Empire was founded Christmas eve of 1865 and has proven time and time again to resurface in America's time of need and set things straight. At one point in history the Klan was over 1.5 million strong. Well the time of need is here again. There are Klans starting to surface and resurface again, and we are all growing strong like before .

We at the American Christian Dixie Knights  are proud to be recruiting heavily and growing rapidly alongside our brothers and sisters. We are not an open membership organization though. We we are ONLY looking for people that are at least 18 years of age. People of pure white lineage, that believe in the Constitution and belive in the True American Christian country that we fight for every day.

We WILL NOT take any jews, homosexuals, anti-christian, anti white.

If you believe in restoration of America and fighting the oppression we face every day as the chosen race. If you are of pure white native born blood. We want to talk to you!

We are very selective of who we grant membership to because we want quality not quantity. We receive several applications per week and only a select few are chosen. We are known as an extremely hard group to be granted membership into, and we take that as a compliment.

If you feel you have what it takes and are tired of sitting on the sidelines waiting to become another statistic. Please get in touch.

In The Sacred Unfailing Bond

What are you going to do to make a difference

Today is the first day of the rest of your life, what are you going to do with it?

This is the time to be proactive and let the general public know there are still people that are proud to be White! There is so much concern these days and people are so afraid of being called a bigot and a racist, people are forgetting who they are and where they come from. There is absolutely nothing wrong with white pride. We as Caucasians are in fact God's chosen race. It was not long ago this fact was widely known and accepted. However people started loosing sight of that as the civil rights leaders started the "black plague of America". Forced integration was and is still pushed on us on a daily basis and was and is NOT WANTED by the Whites OR the blacks. Everyone was very content sticking to their own and not fraternizing outside their own race. People's lives were simple and everyone knew where the proverbial racial lines were drawn and everyone was happy and accepted it. There is nothing wrong with equal rights and everyone should have equal rights, but separately.

As it stands the line that devides us on every level is getting more and more blurred. We as aryans are loosing grip on the once strong hold we once had on our society and rights. The reason for this is simple ; America and the White race has gotten soft. If the blacks want something and don't get their way, they riot, loot, protest, hurt innocent people and disrupt traffic and businesses etc.ect. If anyone tries to stop them or get in their way, they have the support of groups like the NAACP to back them and play the "race card". This disintegration of the pure white blood line is not just a product of pro-black groups like the NAACP or SPLC, but is hugely funded and supported by the most evil race of all..., the Jews.

With anti-white movements in full swing and gaining momentum every day, there will be no white race by 2050. Pure beautiful white babies are almost non existent in comparison to just 15 years ago. Race traitors are among the lowest form of scum on earth and will be dealt with like such on their final day of judgment. It is written in the Holy Bible, races are not to mix. It is sickening and wrong on every level for our white brothers and sisters to be mating with the savages. White girls with black men have become the norm and must be stopped. Having integration forced on our children also must end. The White race needs to say enough is enough!!! When are we even, when do we stop owing those people? They want to be treated like everyone else, but expect special treatment. Where do we draw the line in the sand and stand up to them???

It's time to stop catering to everyone and look out for you and yours. White Americans are so worried about hurting people's feelings and what others think of them, they are not seeing what is really happening right under their noses. This is not a black and white problem, this is a global problem.

PSALM 59;1- "Deliver me from my enemies, o God ; defend me from those who rise against me."

DEUTERONOMY 7;2-3 - "When the Lord, your God delivers them over to you, you shall conquer them and utterly destroy them. You shall make no covenant with them nor show mercy for them. Nor shall you make marriages to them. You shall not give your daughter or son, nor take their daughter for your son. "

For more information please call or email. Someone will get back in touch asap.